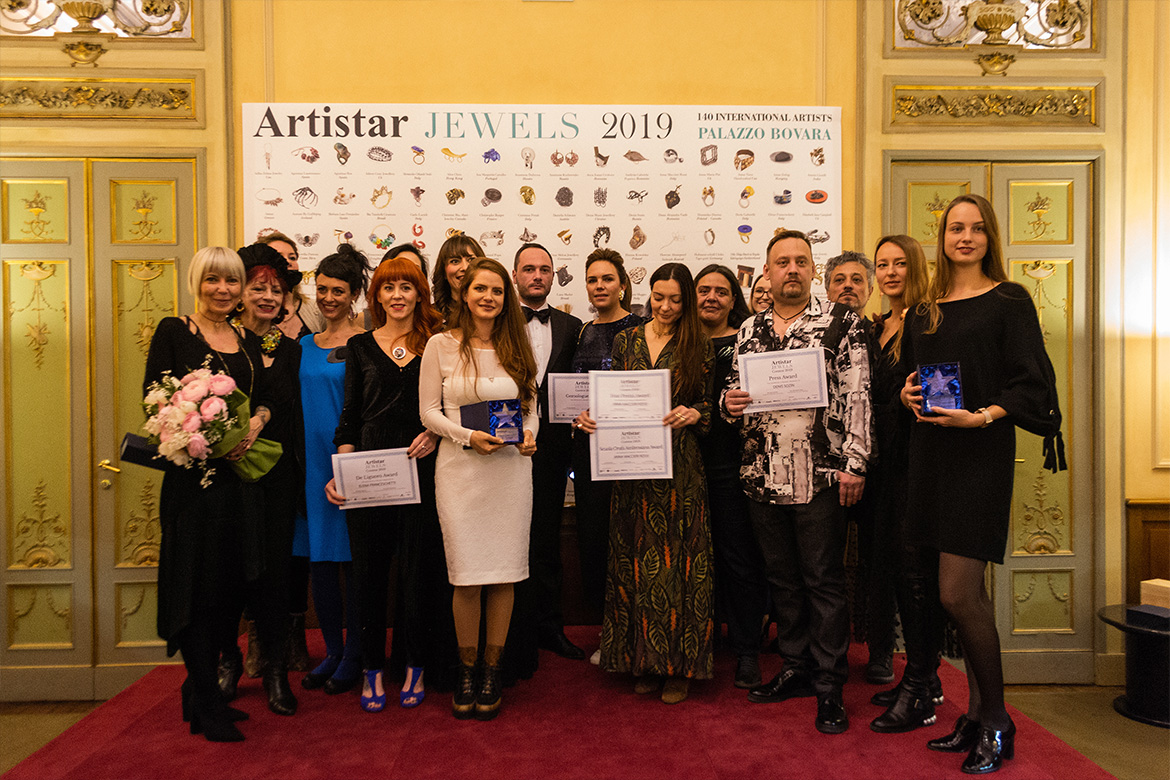 Among the winners of the sixth edition are shining Sowon Joo, Veronika Kuryanova and Bia Tambellii

Great success for Artistar Jewels 2019 which ended on Sunday 24th February at Palazzo Bovara and has staged over 500 creations from all over the world under the patronage of the City of Milan and CNA Federmoda. One of the leading exhibitions during the Milan Fashion Week, set up in the city’s heart. Open to the public with free entrance, a growing trend, according to the model that has been defined by the press of “widespread fashion”, on which Artistar Jewels believes since its very first edition. Even the National Chamber of Italian Fashion recognized the relevance of the event by including it in the official calendar among the events of cultural interest. Creativity, inclusion, research, sustainability, network, high quality and internationality, are some of the key words that define the project conceived by Enzo Carbone in 2014. Growing is the number of designers, curators, gallery owners, buyers and journalists who have admired a highly creative exhibition path and that has also hosted the creations of renowned artists such as Turi Simeti, Ute Decker and Christophe Burger. All the works on display can be purchased on the e-commerce artistarjewels.com and each creation is shown in the volume Artistar Jewels 2019 published by Fausto Lupetti and distributed internationally.

The Korean designer Sowon Joo, a graduate of Seoul National University, has worked in the jewellery and sculpture fields for over twenty years. Among the most appreciated pieces there is a large heart-shaped crochet gold sculpture necklace with a rutilated quartz pendant in the centre.

The Russian Veronika Kuryanova, graduated from the Moscow State Stroganov Academy of Design and Applied Arts and with a master’s degree from the MIREA – Russian Technological University, presented bold bronze and enamel rings with bright colours that show the vitality of continents such as Australia and South America.

Bia Tambelli is a young designer with Italian origins, born and raised in a land rich in precious stones: Brazil. For Artistar she presented geometric and refined pieces from the Trinity collection in gold, diamonds and rock crystal that express a spiritual order between God, the cosmos and men. Form and materials are carefully selected to increase the energy and strength of the wearer.

A special mention was given to the New York born and raised artist and creator of bijoux Nita Angeletti, of Italian origin. Her career began as an actress on Broadway, then went on to sculpture, creating figurines made of fabric, to arrive at the realization of what she calls “Wearable Art” Accessories: creations that reflect in an exuberant way the passion for fabrics, used as pictorial elements with playful and colourful arrangements that want to amuse those who observe them.

During the exclusive awarding night, numerous prizes were given, handed down by the judges of the contest who selected them. The young Dutch Lindsey Fontijn graduated from the renowned Gerrit Rietveld Academie won the Accessory Vogue Vanity Fair Award, awarded by Elisabetta Barracchia, Director of Accessory Vogue Vanity Fair and Wedding Vogue Vanity Fair. The Director also present the Wedding Vogue Vanity Fair Award to the English Michelle Lung graduated in Jewellery Design at Central Saint Martins. Both the artists will be the protagonists of an article on the next issues of the related magazines.  Fashion and costume journalist Maristella Campi has delivered the Press Kit Award to the talented Russian designer Denis Sozin. A press kit useful for his promotion will be realized directly by the juror herself. The De Liguoro Prize, which consists of a week of internship in the De Liguoro atelier, was presented by Gianni De Liguoro to the Italian designer Elena Franceschetti.

Anna Maccieri Rossi with her fine jewellery creations, born in 2018, which contain a quartz movement which rotates a hand-painted disc – and which already boasts collaborations with Cartier, Bulgari, Tiffany & Co and Jaeger-Le Coultre – was awarded by the consultant Ivan Perini, who will create a communication and social campaign for her and also by Luca Solari, founder and owner of the Scuola Orafa Ambrosiana, director of the Via Tadino 30 school in Milan, and Guido Solari director of the Via Tortona 26 school in Milan, Director of the SOA Lab & Factory in Via Savona 20 in Milan, who assigned her a course among those offered by their prestigious Milanese schools.

The Assamblage Award has been awarded to the Portuguese Ana Magarida Carvalho, who will participate in the exhibition entitled “Remains of the Feast” organized by Assamblage – The National Contemporary Jewellery Association based in Bucharest, Romania.

In the end, the Cesarini Sforza Award went to the Hungarian jewellery artist Anna Zeibig who presented original brooches in silver and organza inspired by natural elements.

“When six years ago I decided to found this project, the contemporary jewellery in Milan and in Italy was a phenomenon that was pretty unknown even if it was already appreciated and growing in Europe and in some countries in the rest of the world. – says Enzo Carbone founder of Artistar Jewels and continues – In six years things have changed a lot: today I see a society that increasingly appreciates the uniqueness at the expense of conformism. Artistar Jewels finds in all the artists the energy to continue this journey. Working daily with exceptional creations is something magical and exciting for us and for this we thank them. I think this edition of Artistar Jewels has reached full maturity “.

Let the Milanese industry professionals and an international audience discover unique body ornaments made of different materials, born from deep studies and developed with interesting and unconventional design ideas is among the aims of Artistar Jewels. An articulated project of communication and selection that also has a cultural and informative intent aimed at the public and new generations of goldsmiths and designers. Because of this it was important the involvement and support of Milanese goldsmiths such as the Scuola Orafa Ambrosiana and the professional school Galdus, which lent some brilliant students of the goldsmith’s courses who have studied the displayed works, guiding the visitors during the exhibition with passion and dedication.

An international network able to generate visibility, contaminations, new ideas and collaborations among all the involved entities is what the authors who believe in the project signed by Artistar Jewels appreciate.

Artistar Jewels is the reference point for all contemporary jewellery artists and designers and supports industry operators through different strategies. The purpose is to place them in an ever-changing international market. Artistar offers many useful services to accompany the artists in their path of professional growth: organization of events all over the world, planning of customized communication strategies, creation of new business opportunities and positioning within the reference market. These are just some of the services in support of artists who rely on Artistar. The goal is to create opportunities for promotion and visibility useful to lead selected artists to success.