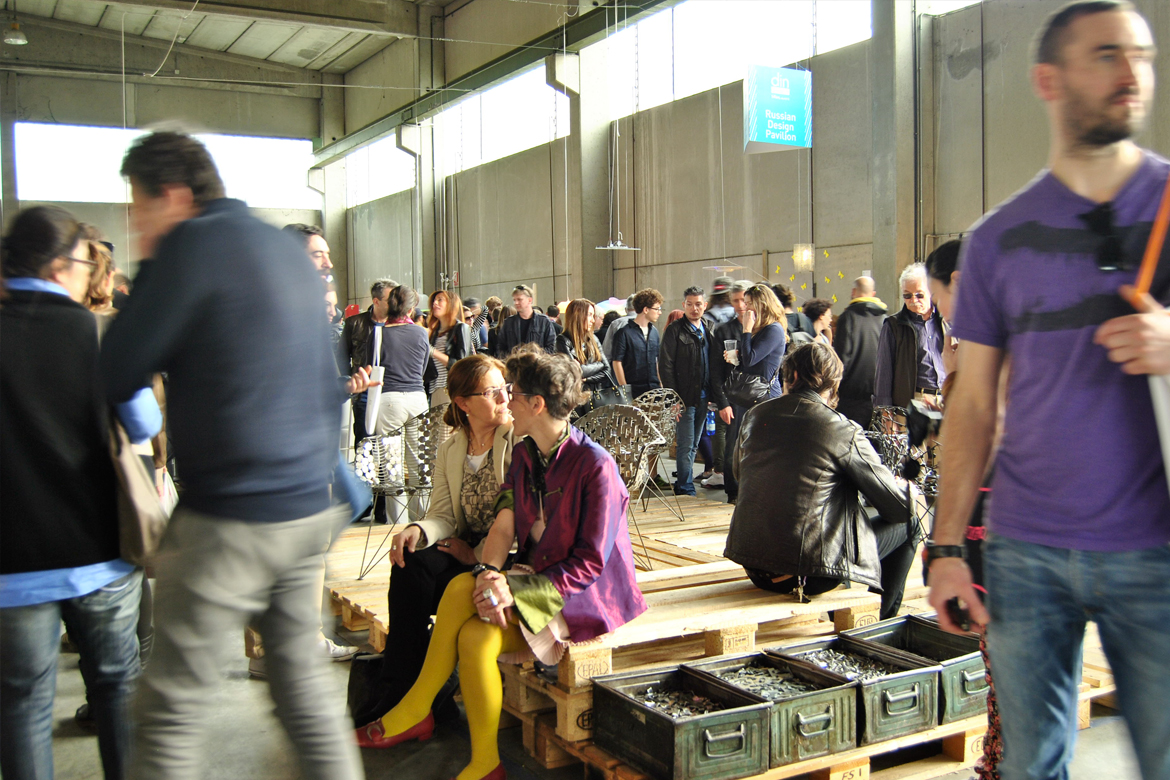 The second edition of the exhibition din – design, organized by Promotedesign.it during Milan Design Week, from 8th to 13th April was a great success. Within an industrial warehouse of 2000 m2 in the heart of the Lambrate district, more than 100 self-produced designers, both Italian and foreign, have exhibit their subjects to an audience of over 100,000 visitors.

If “din” means ” noise ” we can claim that this year the event organized by Promotedesign.it had great resonance and let feel its echo in the whole Lambrate district as a leading showcase for the self-made quality design. Professionals, journalists, fans and visitors were able to admire the projects of more than 100 exhibitors from Italy, Germany, Switzerland, Spain, Denmark, Sweden, England, Ireland, Portugal, Belgium, Hungary, Poland, Japan, China, USA and South America. From the library to the kitchen accessory, from the hanging lamp to the camping tent , from the couch to the rocking horse and the jewels, everything in the name of innovation and eco -friendliness.

The large venue was fully set up using industrial material, mainly palette and cardboard, which have mapped out a thematic path among the exhibition islands, giving equal visibility to designers and allowing a smooth flow of visitors between the two opposite entrances, one on Via Massimiano and the other on Via Sbodio. It was essential for the setting up and the creation of the industrial “mood” the collaboration with RI.CRE.AR, a company specialized in the production of furniture, furniture components and fittings, made with materials coming from the recovery of wood packaging, which provided the materials for the location furnishing.

Among all these exhibitors, the public could vote for their favourite designer through a contest made possible through a collaboration between Promotedesign.it and DDN Magazine. The winner, Boatti Verga Studio, will have an article dedicated to his work in the June 2014 DDN Magazine edition. Boatti Verga Studio, design studio located in Milan and founded by Paolo Boatti and Manuela Boatti Verga, presented at din – design in Baretto, a small home bar from the the reuse of the plastic box used for the delivery of glass bottles at home. Recycling and re-interpretation of a product and then giving life to an object of exclusive design which was awarded by the public at din.

Inside the venue, as well as a food area, a specialized bookshop and conference area, there was the Russian din Design Pavilion, which exhibit the objects by a selection of Russian designers already present in the volume Rub Design Book, first edition of a project aiming to connect the creative heritage of the emerging Eastern countries to the European market industry.

Six intense days in which din – design in was the setting of fruitful networking among professionals, with full calendar of events in the event, starting with the presentation of Design For the book catalogue that put in contact designers and companies, edited by Promotedesign.it and published by Fausto Lupetti now in its third edition. The presentation took place on Saturday 12th at 5 pm in the meeting area. The speakers were Enzo Carbone founder of Promotedesign.it, Francesca Russo, editor of DDN Magazine, Paul Barichella, food designer Daniele Lupetti publisher of Design for, Marcello Ziliani, architect and product designer. The meeting was followed by the Award ceremony for the winners of the contest # visual WITH – WITH design food: Eat bite by Francesco Buzzo, Piera Lambertoni Jordan and Serena Food Design for happy living by Chiara Ricci, and Platefulips by Tina Conforti awarded as the best project of food design inspired the theme “A designer and his relationship with food.”

The presentation of the Rub Design Book, held on Friday 11th at 5pm, helped to enliven din – design in. Anastasia Krylova and Maria Twardovskaya creators of the project Rub Design and founders of the Russian Design Pavilion, and the double appointment with the workshop “The self-produced design and communication 2.0”, presented by Alessandra Pepe, digital media specialist and web editor Momastyle.com, with the presentation of Axel Iberti, Head of product, Gufram.